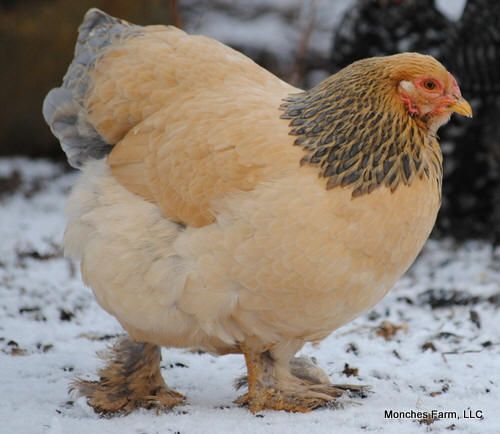 Buff Brahma chickens are good chickens to raise in cold weather.  They have an abundance of feathers which extend down their legs to help keep them warm.  Buff Brahmas have a pea comb.

Production: The Buff Brahma chicken lays about 150+ brown eggs per year. They also make great meat chickens due to their extremely large size. Buff Brahmas have a yellow skin color. Brahma hens are known to be broody.

Temperment: Buff Brahma chickens are known as gentle giants.  They make good pets due to their calm and gentle nature.  It is recommended that they be handled a lot and tamed as chicks, because their large size makes it difficult to handle them as adults if they are not used to humans. Buff Brahma chickens make good foragers.

History: Buff Brahmas are a relatively new breed.  They were originally imported from China in the 1850’s, but the Buff Brahma was not accepted into the American Standard of Perfection until 1924.  For many years, Buff Brahmas were seen only as a meat chicken due to their large size.

Color Description: As its name implies, the Buff Brahma has a buff, or golden, colored body with black feathers on the tail and neck.