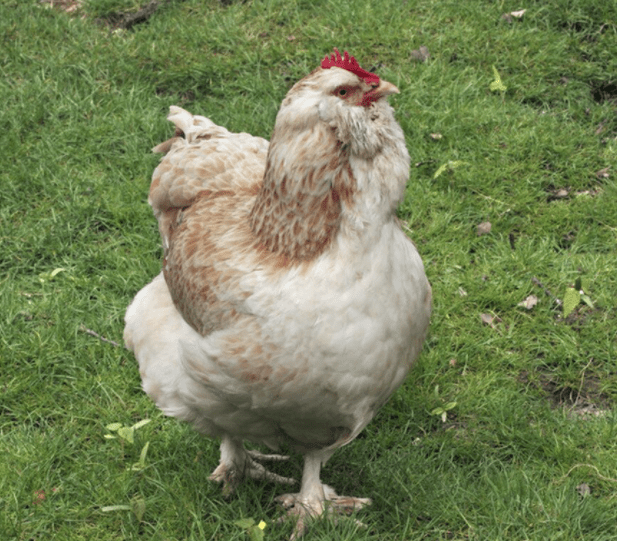 People own Salmon Faverolles for their silliness and their steady egg production.

Production: You can expect between 150 and 180 tinted eggs per year from each Salmon Faverolles in your flock. They are known to continue laying through the winter.

Temperament: Salmon Faverolles are described as docile, gentle, and friendly. They are not necessarily shy, but don’t deal well with extremely aggressive breeds. Due to their sweet nature, they are often kept as pets and they do well with children.

History: The name Faverolles comes from a small village in France, north of Paris, which is the region in which the breed originated. One interesting thing about the name is that a single representative of the breed is still a “faverolles” rather than a “faverolle.” For many years, this was one of the most popular breeds in the north of France, with one expert estimating 98% of the chickens sold in the Houdan market were Faverolles.

While many people keep Salmon Faverolles as exhibition birds, or as novelty pets, they are becoming popular with small flock keepers as well. Because they are good-tempered, dependable layers and they make good members of small flocks. They are great for colder climates.

The Salmon Faverolles was first included in the American Poultry Association’s Standard of Perfection in 1914. There is also a breed specific club dedicated to promoting these fluffy chickens, the Faverolles Fanciers of America.